Wilmington is the closest city to the Compass Pointe retirement community and offers an appealing mix of elegance, culture, and history. Take a stroll along the Cape Fear River, or window shop on Front Street, where fine restaurants abound. Catch a show at the 1,500-seat Wilson Center, which has hosted everything from Broadway shows and rock concerts to dance performances and the North Carolina and Wilmington Symphony Orchestras. Take in a locally produced show at Thalian Hall, which opened in 1858 and is one of the oldest theaters in the USA. Wilmington’s suburbs feature popular parks teeming with playgrounds, jogging paths, tennis and basketball courts, and more.

Get Your FREE Coastal Area Guide! 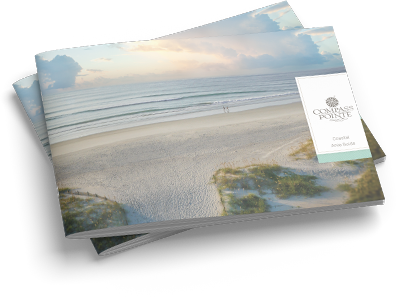 The town of Wilmington itself has a great small-town feel about it, filled with sophistication, history, and class.
~ Lori & Perry

Hollywood of the East

Wilmington has another nickname, Wilmywood, with films such as Iron Man 3, Safe Haven, and The Conjuring all featuring this beautiful city as their backdrop. It is not uncommon to spot an “A list” celebrity eating at one of the many fine-dining establishments of historic downtown. If you’re not afraid of the spotlight, head down to Screen Gem Studios to add your headshot to extras list.

The only way to truly understand what it’s like to live in Wilmington is to visit and experience it for yourself. And, we know that when you visit, like so many before you, it will have a good chance of being the next place you call home. Book your Discovery Package today!

Spend a weekend on the coast to tour the property, experience the luxury amenities, and see firsthand how Compass Pointe combines resort living with the comfort of your new home.